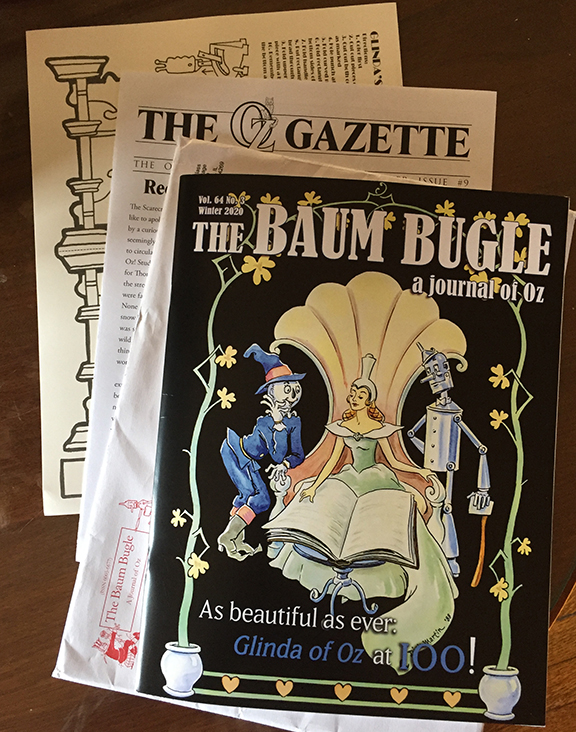 I joined the Oz Club in 1971, making the winter 2020 Baum Bugle that just arrived my 150th. Every time, every issue I’m amazed at the ability of its editor, currently, Sarah Crotzer, to deliver one turning page after another of new Ozzy discoveries and insights.

This issue, tied to the 100th publication anniversary of Glinda of Oz, offers readers an appreciation of that book by leading Baum scholar Michael Patrick Hearn, and a look at the book’s original advertising and reviews by Scott Cummings—who’s edited a dozen Bugle issues of his own

Other features include Robert Luehrs’ essay “The Sorceress, the Goddess, and the Matriarchate.” Luehrs’ writing hasn’t been in the Bugle for ages; I attended a week-long Oz class he taught back in the 1970s; I’m pleased to see him return. Frequent Bugle contributor Dina Schiff Massachi introduces us to the legendary Lena Horne—who I personally consider the highlight of the 1978 film version of “The Wiz.” Angelica Shirley Carpenter writes about Maud Gage Baum from the perspective of wife-as-muse. There’s also a fascinating look by Peter Hanff at John R. Neill’s work to illustrate Glinda the Good referencing original artwork in the collection of the Oz Club. The tradition of strong women and Oz comes up to the present in an interview with Israeli Oz fan and Club member Gili Bar-Hillel Semo. I first “met” Gili when she was a teenaged contributor to The Oz Gazette. It’s a delight to read about her success bringing Oz to fans who, thanks to her, now find Baum’s books in Hebrew. 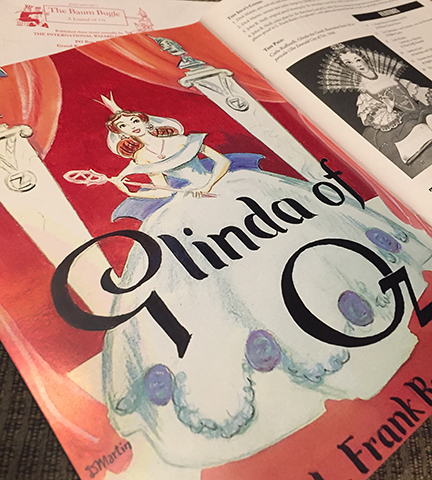 The front covers of the issue share alternate cover designs created by Dick Martin. The back covers are the line art from Neill’s first color plate of Glinda with the colored version of that piece—a composite using, in part, surviving photo proof from LFB’s own scrapbook—to complete the picture.

This issue also thanks those who support the Oz Club through their donation level memberships, profiles Virginia “Gina” Wickwar, recipient of the 2020 L. Frank Baum Memorial Award, and offers a heartfelt tribute to David Greene by his dear friend of many decades, Peter Hanff. News and reviews complete the issue.

Have we ever had an editor who gives us a glimpse of what to expect in the next issue? I don’t think so….  Sarah’s risen to that challenge with a final page that serves up three glimpses into the future. We can expect to meet the wonderful wooden Woozy, a toy made to promote Baum’s 1913 film “The Patchwork Girl of Oz”. Nate Barlow is researching the marketing and promotion of this feature film. Atticus Gannaway, our current reviews editor and a past editor of the Bugle himself, has written a history of Buckethead Enterprises of Oz and the marvelous man behind its curtain, the late Chris Dulabone. Third, Bill Campbell remembers the 1981 Children’s Theatre Company of Minneapolis production of The Marvelous Land of Oz. Those of us who didn’t get to be in that audience can live vicariously through Bill.

The Oz Gazette, compliments of editor Nick Campbell, keeps getting better! Mark Manley, whose artwork has given the Bugle and the Gazette a fresh new look under Sarah’s direction is profiled here for our kids. (You don’t have to be a kid to read it!) Creative, crafty, clever members will also be happy to take on our latest project by Krofty; your very own magical Skeropythrope modeled after that used by Glinda the Good herself! 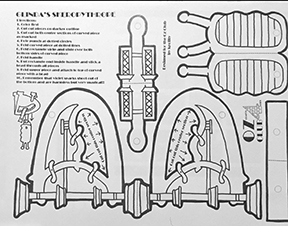