OFF TO ILLUSTRATE THE WIZARD

An Interview with Michael Hague 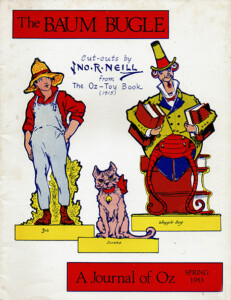 One of the most successful of current children’s book illustrators is the young artist Michael Hague. While most children’s books are lucky to sell between 20 and 30 thousand copies, his first major work, a newly illustrated edition of Kenneth Grahame’s The Wind in the Willows (1980), has sold over 200,000. The following Fall, he issued Michael Hague’s Favourite Hans Christian Andersen Fairy Tales which sold 80,000 copies in its first printing. Last season, his principal publishers Holt, Rinehart and Winston in New York published Michael Hague’s interpretation of The Wizard of Oz in a first printing of between 100 and 150,000 copies. This last book, requiring ninety watercolors to fully illustrate L. Frank Baum’s famous story, is perhaps Hague’s most ambitious work to date.