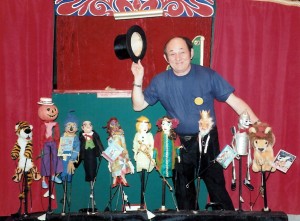 Bill was one of the long-term Royal Illustrators who contributed faithfully to the International Wizard of Oz Club. He was not only an accomplished artist but also a major puppeteer, a charming clown, a singer, and a fine stage magician who entertained the Ozmopolitans in numerous performances. Bill’s artistic talents were widely used in the Ozmopolitan Conventions and in the Club’s publications. His delightful Oz posters were displayed at the punch bowl each year to illustrate the year’s theme and signal its official opening.

Bill designed convention folders, and he created the fine illustrated initial letters that frequently grace The Baum Bugle. Other contributions included covers, illustrations, and designs for Oziana and other Club publications, including Unexplored Territory in Oz, The Runaway Shadows, and The Oz Game Book.

He once wrote, “I love creating and Oz gives me that chance.” Club members who had the pleasure of enjoying firsthand his creative work as illustrator or performer considered it a privilege to know him.