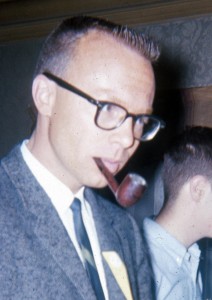 C. Warren Hollister, professor of medieval history at the University of California, Santa Barbara, was a lifelong collector of Baum and Oz, building one of the finest collections ever assembled.

With Peter E. Hanff, Judith Pike, and Blake Maxam, he was co-founder of the Winkie Convention in 1964. He served the Winkie Conventions in many capacities over the years, but is probably best remembered for his droll and ironic demeanor in his role as auctioneer. His vast knowledge of complex bibliographical points was disguised by a humorous, self-deprecating style that entertained everyone, but particularly those in the know.

In addition to his numerous scholarly publications, Warren was co-author with Judy Pike of a fantasy novel, The Moons of Meer. He was a major contributor to The Baum Bugle; particularly noteworthy was his provocative essay, “Oz and the Fifth Criterion,” in the Winter 1971 issue. In that essay, Warren posited that while Baum may not have had the literary stature of Ursula K. LeGuin, J. R. R. Tolkien, or C. S. Lewis, he was every bit their equal in his ability as a storyteller. Warren served on the Oz Club’s Board of Directors for many years, and also served as the Club’s vice president.