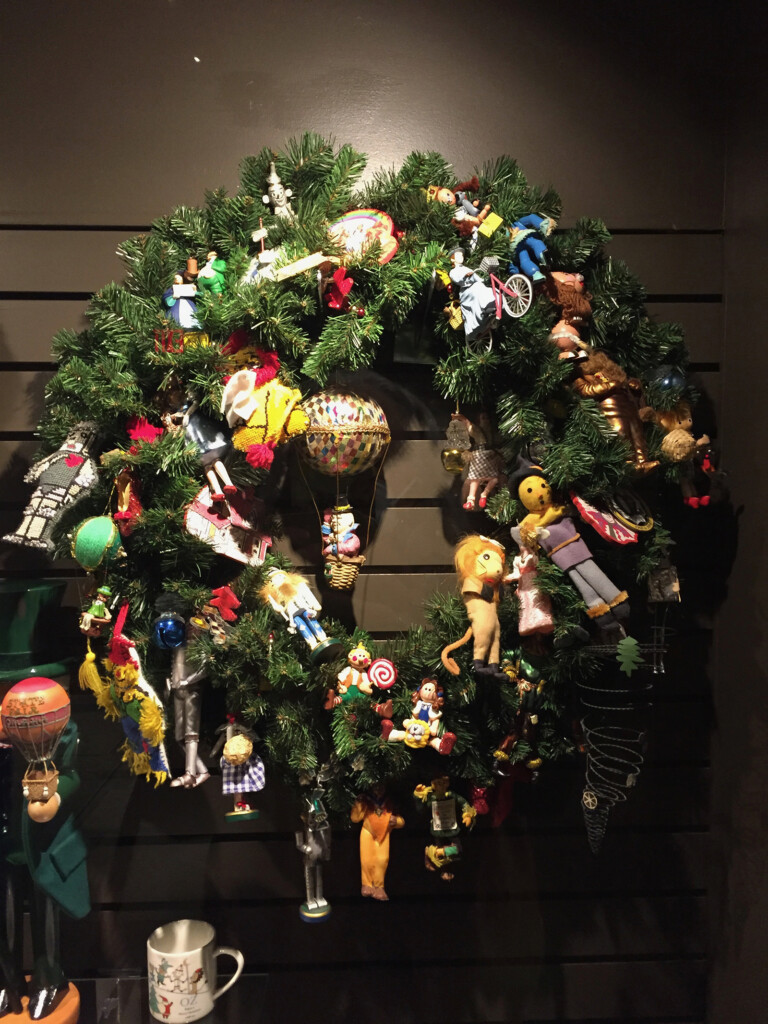 The Oz Club’s case at the OZ Museum in Kansas now glimpses into the holiday world of Christmas Oz collecting.  I set it up last week taking, as is my bad habit, far more material than I could use. Here’s what made the cut and will remain on display until I return in the new year with a new load of Oz.

Denslow’s Night Before Christmas in the original edition with a smaller reprint opened to a page where a toy Tin Woodman can be spotted in Santa’s bag.

Finally, Ozoplaning with the Wizard of Oz, the 1939 MGM edition of The Wizard of Oz, and Rand McNally’s boxed “Wonderful Library of Oz.” These three were advertised in a book seller’s Christmas catalog that’s displayed with them open to that page. 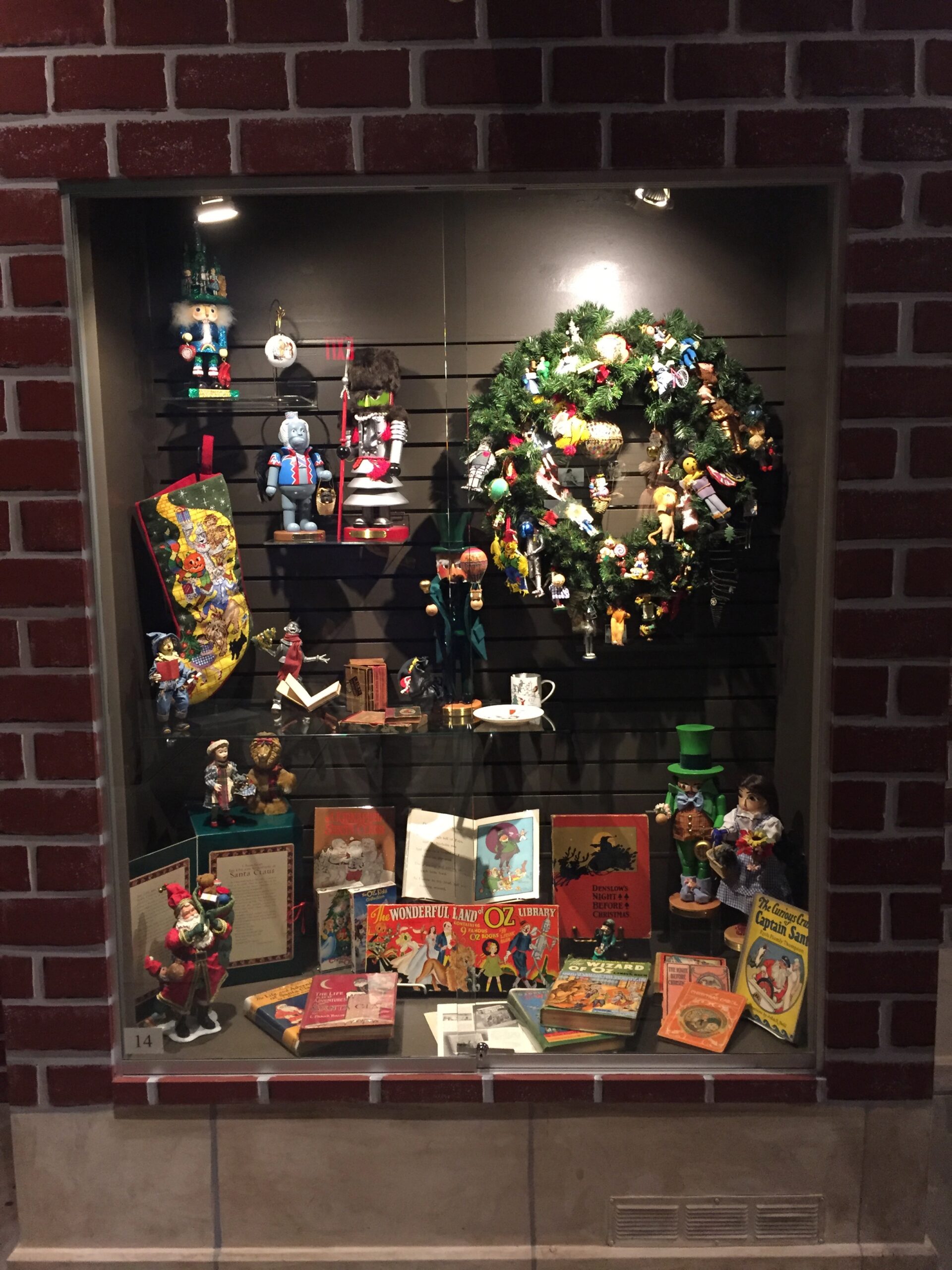 Ornaments
With hundreds to choose from in my collection, I picked about 50.  I worked to mix vintage pieces with new, and mass-produced with homemade. I was sure to add Miss Gulch and the Lollipop Guild Munchkin from the MGM film. Set apart from the wreath is a Santa styled to resemble Denslow’s 1904 illustrations and a ball with a scene from the book printed on two sides.

Nutcrackers
After deciding to stick with the more expensive nutcrackers, I pulled a Steinbach Dorothy, Munchkin Mayor, Wizard, and Winkie Guard. From Kurt Adler’s collections, I added a Flying Monkey and a Wizard who wears the Emerald City and miniature characters on his head.

I was taking home the modern illustrated versions of Life and Adventures of Santa Claus, a set of prototype figurines for that story, and the translations I had of it. Dismayed to have no international representation, I found space for a Japanese Oz cake plate and cup.  Then I added caroling figures, a stocking my sister-in-law made me, Oz Kids VHS tapes of “Who Stole Santa?” and “Christmas in Oz,” and a 12-inch Santa figure made as a collectible in 2005. I added the Santa figure’s box since one side panel talks about Life and Adventures. 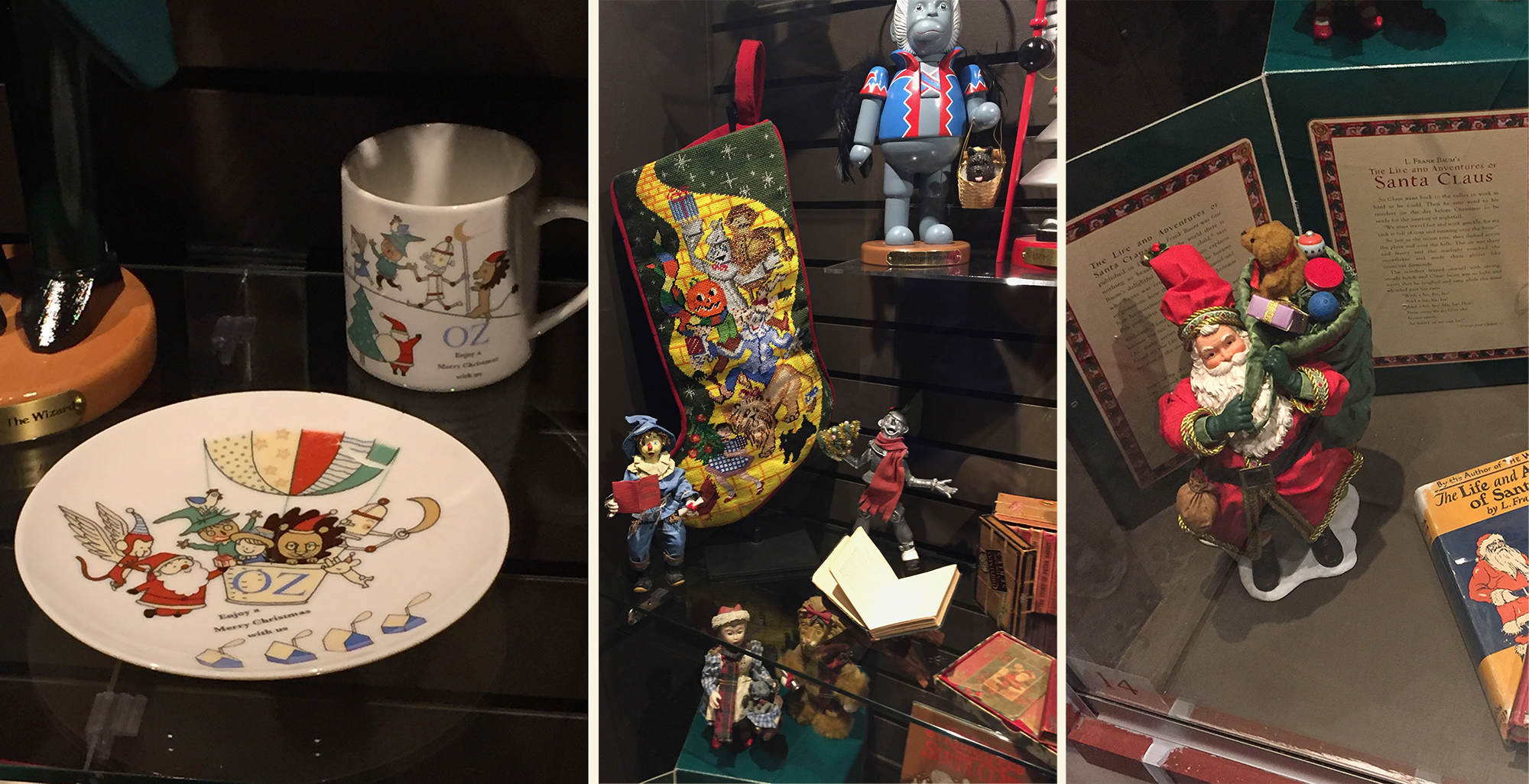 Stepping back sufficiently pleased, I was left to pack back up what I didn’t use. I should have known the “What’s Your Holiday Wish? Banners from the Warner Brother’s store wouldn’t work as side panels. I’d decided against the Christian Ulbricht Wizard nutcracker because—aside from two being enough—the Steinbach design included the Wizard’s bag of icons and had the State Fair design on the balloon. A large framed print of Santa toasting Ozma in The Road to Oz came back home, too. I didn’t really think there was a place for it, but in case there had been some problem with the wreath, I wanted a backup plan that could fill space.

By the time these return and all the material from the previous display were back in the car, it was back home for me, grateful, as always, that the museum gives our Club this opportunity to promote our Club to its visitors.

Written by Jane Albright
Currently president of the International Wizard of Oz Club, Jane is a life-long Oz fan. She's attended Oz events around the country regularly since 1974 and amassed an Oz collection that ranges from antiquarian books, original artwork, and ephemera to children's playthings, posters, and housewares. In addition to speaking frequently about Oz, Jane has loaned Oz material to numerous public exhibitions.
Previous ArticleGuest Blog: How Much is that Bugle in the Window?Next ArticleOz-Theme recipes