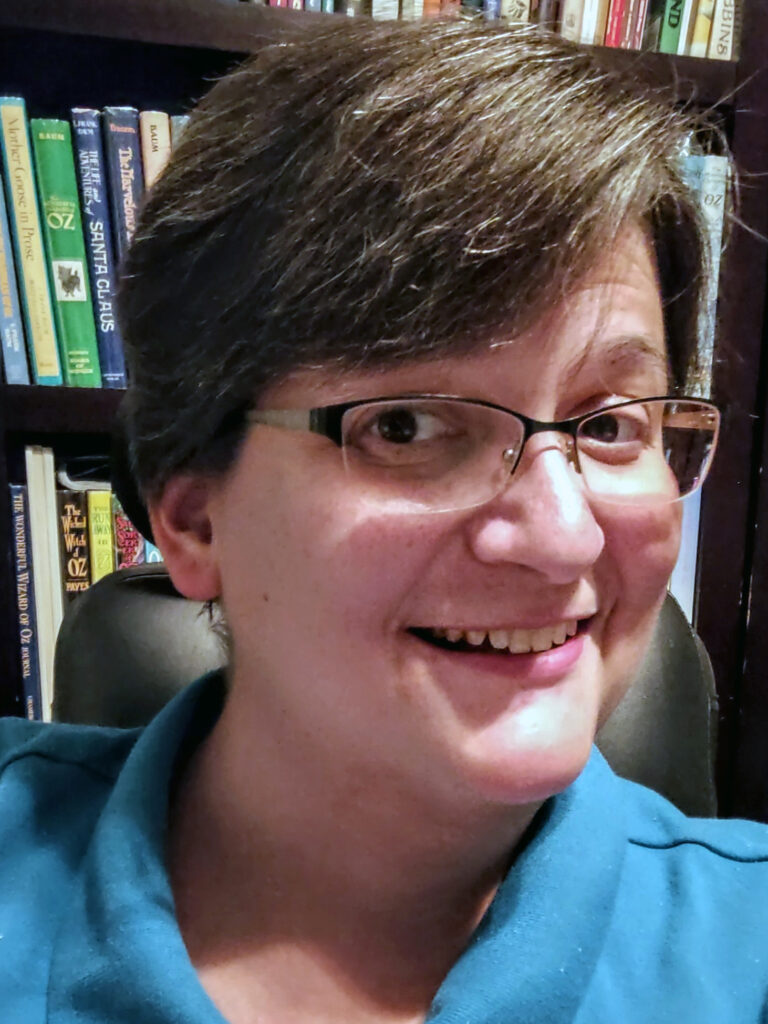 Hey everyone! Your friendly Baum Bugle editor Sarah here, filling in for Jane. When’s the last time you thought about reading the Bugle? The Baum Bugle began in June 1957 as a way for Oz Club president Justin Schiller to keep his members informed of Ozzy news, including convention reports and details on upcoming merchandise. It quickly ballooned from those four mimeographed pages to take in research, memoir pieces, rarely published stories by L. Frank Baum, and more.

Today’s Bugles are usually 48 pages or a little bit more, and I do my best to cram in as many interviews, research pieces, collectible data, and previously unseen material as I possibly can. If you aren’t a 2020 member right now, why not? The 2020 membership deadline is Oct. 31—and look what you might miss out on! 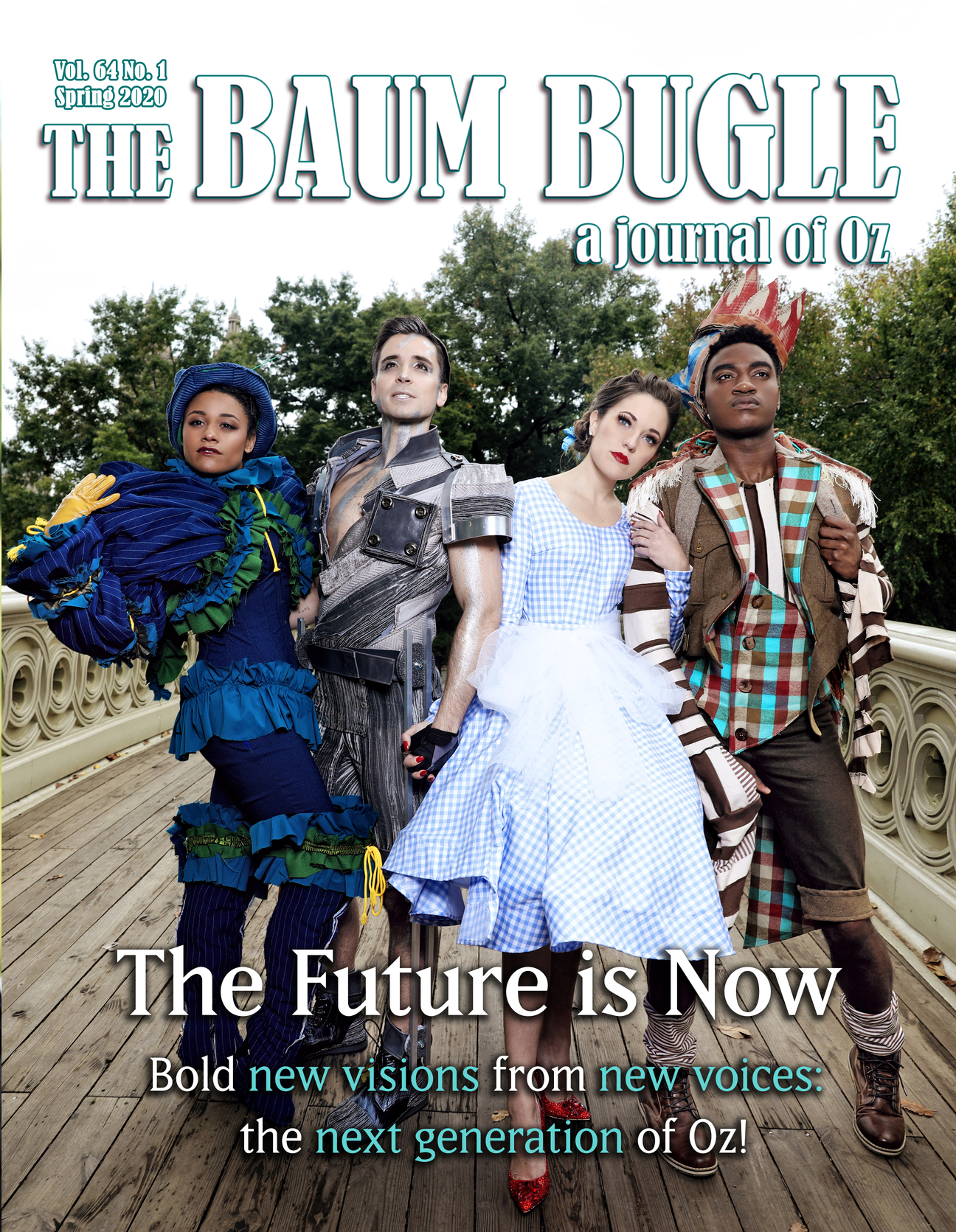 The Spring 2020 issue was particularly fun because I had the chance to interview costume designer Beck Jones and photographer Curtis Brown about their amazing, modern photographic tribute, Broadway Celebrates Oz. We had the opportunity to put Curtis’ beautiful images on our covers in full color, and we included several of Beck’s design sketches inside, too. Their enthusiastic recollections of a passion project made a great Oz story I was thrilled to tell.

The Spring issue also gave us a chance to think about other unique visions of Oz. David Diket gave us a thorough collector’s guide to the charming View-Master Wizard of Oz reels, Nick Campbell reviewed the groundbreaking podcast Hit the Bricks, and Christina Maffa paid tribute to 25 years of The Wizard of Oz in Concert.

And we had fun for our research-inclined readers, too: L. Frank Baum’s claim to a “modern fairy tale” was examined by a group of talented undergraduate students from UNC at Charlotte. Most exciting of all, Anil Tambwekar took us on an amazing journey to discover Mary Dickerson Donahey, a contemporary of Baum’s who was offered—and turned down!—the opportunity to continue the Oz series.

The Spring issue really gave everybody something to look forward to, and we were all really pleased with how it turned out. But that’s nothing compared to our next one. I think everyone found their own way to fight the pandemic blues this summer, but the staff of The Baum Bugle found themselves lost in the Nome King’s dominion…

The Autumn 2020 issue is a wall-to-wall celebration of Walt Disney Pictures’ 1985 family adventure movie, Return to Oz. Ever since I became editor, I’ve wanted to go back and revisit my favorite Oz adaptation: not only did it seem like the right time this year, but it turns out, Disney agreed! Through the generous cooperation of the Walt Disney Archives, we are able to present a previously unpublished interview with Harley Jessup (now production designer of such Pixar movies as Ratatouille and Coco), who took on the job of designing sequences for Return to Oz early in his career. Archivist Kevin M. Kern has not only shared his extensive interview, he’s provided us with a dozen beautiful examples of Harley’s art, most of which have never been seen before. To take full advantage, we had to include a color center spread…!

But that’s not all. My good friend Nick Campbell and I have packed this issue with goodies, including articles by Karen Diket, Coyote Shook, and Howard Berry, who has brought with him some very special interview transcripts of his own… If you love Return to Oz, this is the issue you’ve been waiting for: fire up your limited-edition David Shire CD and whistle the ragtime march with the rest of us. And if you haven’t given it a chance in a while—come on in, the water’s fine! (But remember to bring a chicken.)

And what of Winter? Autumn’s just coming out now, but Winter won’t be far away! The Winter 2020 issue will celebrate two remarkable 100-year milestones: the centenary of L. Frank Baum’s Glinda of Oz and of the Nineteenth Amendment, which gave many women the right to vote in the United States. We’ll have extended looks at the strong and amazing women in the world of Oz: in fantasy, focusing on Glinda herself; history, with Baum’s wife Maud; and our modern day, as the Oz world is uplifted by women everywhere.

That’s right about 150 pages of genuine Oz goodness, tackling all sorts of topics, ideas, and new research—for $30 a year. If you don’t have a 2020 membership, why are you still hesitating? It’s all here waiting for you, guaranteed to put a perk in your day, and it’s so much easier to look after than a puppy! Sign up or renew today by clicking that link! 😀  (And enjoy your new Bugle issues!)

Written by Jane Albright
Currently president of the International Wizard of Oz Club, Jane is a life-long Oz fan. She's attended Oz events around the country regularly since 1974 and amassed an Oz collection that ranges from antiquarian books, original artwork, and ephemera to children's playthings, posters, and housewares. In addition to speaking frequently about Oz, Jane has loaned Oz material to numerous public exhibitions.
Previous ArticleOz TalkNext ArticleChristmas in the OZ Museum