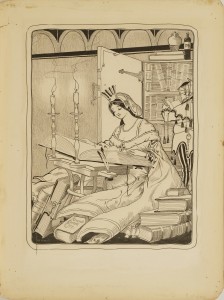 Original drawing by John R. Neill, rendered as a full-color plate in The Marvelous Land of Oz (1904). The publisher’s staff artist hired to add color to this work was either familiar with Oz or well directed. The 16 color plates appearing in the book’s first edition reflect the preferred colors of the country in Oz in which the depicted action takes place. This illustration of Glinda the Good in her library, for example, is accented with shades of pink and rose to reflect the Quadling preference for red. 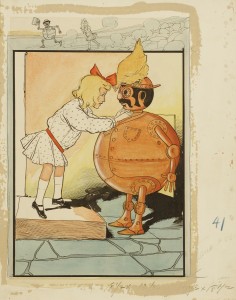 Original John R. Neill illustration for Ozma of Oz (1907) of Dorothy and Billina discovering Tiktok. This interesting illustration was most likely rendered in black ink on white Bristol board, Neill’s usual method, then colored in after the engravings were done. A similar work is held in a private collection; provenance suggests that the similar piece was colored for use in a window display, suggesting that purpose for this piece as well. 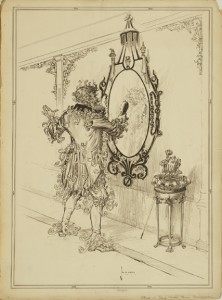 illustration by John R. Neill for The Road to Oz (1909). This illustration of the Shaggy Man admiring his shaggy new clothing is a fine example of Neill’s attention to detail. Busts of five Oz characters are included in the mirror’s frame, with versions of Jack Pumpkinhead, the Scarecrow, and the Tin Woodman presented as carved architectural detail overhead. The Shaggy Man’s hat, gloves, and walking stick wait on the table at his right. 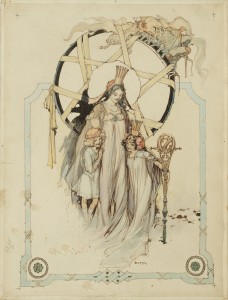 Original John R. Neill painting for The Emerald City of Oz featuring Glinda the Good with Dorothy and Ozma. Only three Oz books had color illustrations derived from Neill paintings. He made 17 paintings for each of two books, Dorothy and the Wizard in Oz (1908) and The Emerald City of Oz (1910). They were used as 16 color plates and a front cover in each title. Neill also created an original painting for the dust jacket illustration used with The Road to Oz. 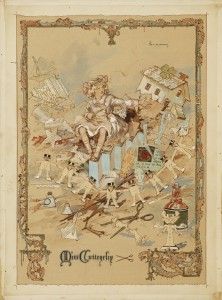 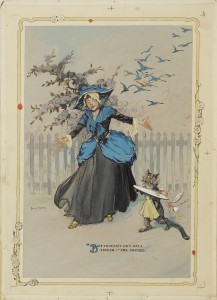 Original John R. Neill painting for The Emerald City of Oz (1910). This painting was used to illustrate the chapter “How They Encountered the Flutterbudgets.” Working from his home studio, Neill frequently used his three daughters, friends, neighbors, and even family pets as models for his work. 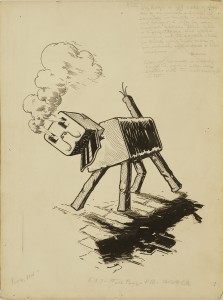 Original illustration by John R. Neill for The Patchwork Girl of Oz (1913). This drawing of the Woozy prompted a note from L. Frank Baum. His handwritten message to John R. Neill appears in the upper right corner, explaining that the Woozy is not made of wood but has skin comparable to that of a hippopotamus. Despite the author’s concern, the drawing was published just as it was. 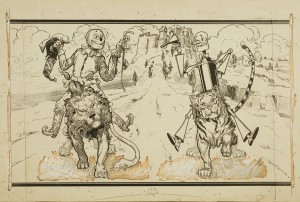 Original drawing by John R. Neill for The Patchwork Girl of Oz (1913). In addition to serving as the endpapers for Baum’s seventh Oz book, this illustration was adapted for and used in Baum’s Little Wizard Stories—a series of short Oz tales designed to introduce younger readers to Oz. The adaptation is obvious in this original artwork; shadows of the two characters have been carefully blocked out.