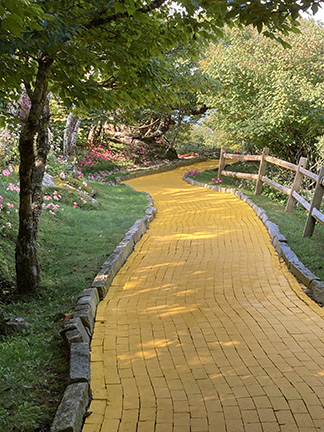 During Autumn in Oz Kansas performances include Dorothy with Professor Marvel, Miss Gulch, a musical number choreographed and directed by Sean Barrett, and Dorothy singing “Over the Rainbow.”

That Yellow Brick Road in North Carolina gets me every time. During Autumn in Oz when Kansas and Oz come alive with costume characters and skipping children, there’s just nothing like it. The Oz Club settled in for three consecutive September weekends of promoting our organization. I joined Lynn Beltz for the first of them (she was there for all three) and enjoyed myself immensely.

Our booth was on a corner just outside the Emerald City theater tent, so we opted to set our back banner at an angle so people could come in from two sides. The characters came by on their way to every performance of their Emerald City number. Long-time Club member Karen Owens had a double booth space just across from us that attracted a steady stream of collectors.

Lynn. Beltz, me, and Mark Jones in the Club booth. Many fans, including Tiffany Sutton, were drawn to a Tik Tok figurine on the table calling attention to our current Baum Bugle cover. But the biggest eye-catcher was our beautiful new character art by Joe Shipbaugh.

Fans were everywhere. Among them were Club members and friends who’d stop to spend some time with us.

Joey Shipbaugh’s wonderful artwork made for this website debuted at the event, so it was especially fun to have him on hand — even though he was performing as the Cowardly Lion. I was delighted to meet Suzi Fire, Jeff Young, Tara Tagliaferro, EmKay Shrader, Mark Jones (also in character as Prof. Marvel), Tiffany Sutton, and so many other friends in person for the first time. Other Club members I’ve known for years like Sheila Lamb, David Lee, and Sean Barrett (who was in charge of the entire event) popped in regularly.

Sean was kind enough to take David, Lynn, and me to see the Park’s history set up down at the base of the mountain. It was a mini-museum!  And he let us visit the new storefront after hours; when you work a booth at an event like this, you are generally too busy to see what else is happening during the open hours. I was especially curious to see the new storefront; a case of vintage Land of Oz souvenirs was on display and the collector in me wanted to take my time in front of that glass door.

The new storefront opened by the Land of Oz sells exclusive merchandise. A display case is packed with rare Park souvenirs from the 1970s.

We were also (of course!) pleased to add new members to our ranks. Dane Keil stands out in memory for wearing a shirt with the 1921 Wonderful Game of Oz. He later featured the park on his Oztober Youtube series. Visitors at the Land of Oz ranged from families who’ve been coming for generations, to fans like Dane finding it for the first time. Like our Club, it was all ages, all Ozian interests, all celebrating Oz.