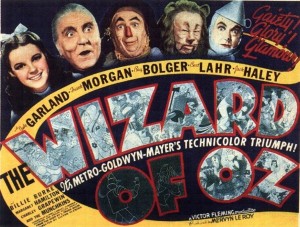 MGM’s 1939 film classic The Wizard of Oz, the most famous adaptation of L. Frank Baum’s novel, was far from the first. The Wizard of Oz was a Broadway mega-hit way back in 1903, making a deep impact on the popular culture of the early 20th century. Nor was the MGM film the first Wizard of Oz to reach the silver screen; that distinction belongs to a 1910 short made by the Selig Polyscope Company. The 1939 movie was not even the first Oz film adaptation to feature prominent actors; fourteen years earlier, a slapstick version of The Wizard of Oz had been released, co-starring movie comedians Larry Semon and Oliver Hardy. 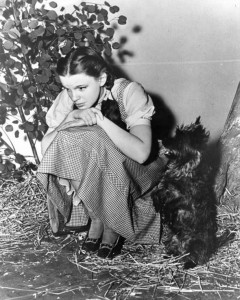 What MGM’s Wizard of Oz can claim, however, is the title of not only the best-known and most greatly loved Oz adaptation of all time, but one of the most beloved and most widely seen films ever made. The American Film Institute has named it the best American fantasy movie, and it is preserved in both the Library of Congress’s National Film Registry and UNESCO’s Memory of the World Register. The movie was nominated for six Academy Awards and won two.

The Yellow Brick Road from paper to celluloid was not an easy one; the production of The Wizard of Oz was both arduous and expensive. More than a dozen writers tinkered with the script through numerous revisions (screen credit ultimately went to Noel Langley, Florence Ryerson, and Edgar Allan Woolf); five directors came and went (the final movie bore the name of Victor Fleming, who was on set for most of the filming and also directed Gone with the Wind the same year); Buddy Ebsen, originally cast as the Tin Man, had to leave the production when his silver makeup made him sick; and Margaret Hamilton, who played the Wicked Witch of the West, suffered severe burns while filming a special-effects scene and spent six weeks recovering. The film eventually exceeded its budget by half a million dollars. 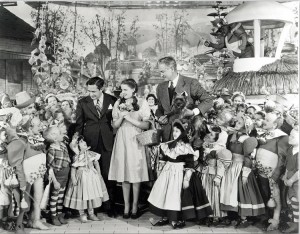 In the end, however, the sheer manpower and determination of the most powerful movie studio got the job done, and The Wizard of Oz debuted to great fanfare with a star-studded premiere at Grauman’s Chinese Theatre in Hollywood on August 15, 1939. In early test screenings the film was nearly two hours long; by the time of the premiere it had been cut to its final 101-minute version, with Judy Garland’s indelible rendition of “Over the Rainbow” surviving only because of the combined insistence of director Victor Fleming, producer Mervyn LeRoy, and associate producer Arthur Freed. 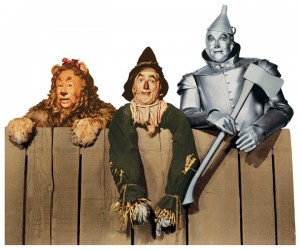 Contrary to some claims, The Wizard of Oz was generally well reviewed in 1939, although it did not break even in its initial release. The movie had successful re-releases in 1949 and 1955, but it was through the new medium of television that Wizard achieved immortality in popular culture. First aired on TV in 1956, the film returned to the small screen in 1959 and became a special once-a-year family viewing event from then until 1991. That annual tradition secured Wizard a firm foundation as a beloved staple of every American’s childhood. 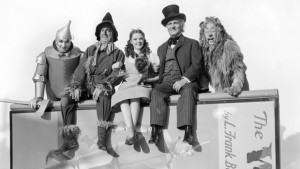 Many unique elements contributed to the immortality of the MGM film. Apart from the innate power of the original story by L. Frank Baum, the monumental performing talents of Judy Garland as Dorothy may be the biggest single factor. Under the expert direction of Victor Fleming, Garland, along with co-stars Ray Bolger (the Scarecrow), Jack Haley (the Tin Man), and Bert Lahr (the Cowardly Lion), brought the story to life compellingly and sensitively. An army of talented costumers, painters, makeup artists, sound and special effects experts, camera technicians, musicians, and others made the wonderful Land of Oz a stunning reality for millions. The dazzling songs by Harold Arlen and E. Y. Harburg are permanent fixtures of the musical lexicon, with the Oscar-winning “Over the Rainbow” ranked number one on the Recording Industry Association of America and National Endowment for the Arts’ “Songs of the Century list” as well as on the American Film Institute’s “100 Years…100 Songs” list. An even greater tribute may be that “Over the Rainbow” became a meaningful anthem evoking home for American troops overseas during World War II. 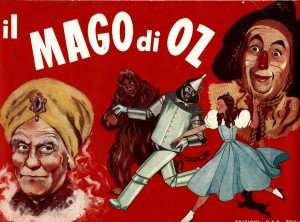 The late film critic Roger Ebert wrote that The Wizard of Oz “somehow seems real and important in a way most movies don’t. Is that because we see it first when we’re young? Or simply because it is a wonderful movie? Or because it sounds some buried universal note, some archetype or deeply felt myth? I lean toward the third possibility, that the elements in The Wizard of Oz powerfully fill a void that exists inside many children…. Its underlying story penetrates straight to the deepest insecurities of childhood, stirs them and then reassures them. As adults, we love it because it reminds us of a journey we have taken. That is why any adult in control of a child is sooner or later going to suggest a viewing of The Wizard of Oz.” 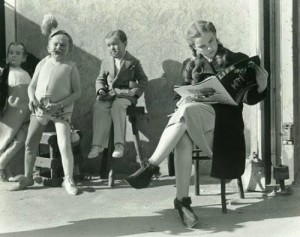 And it is that first viewing of The Wizard of Oz that often creates in children a fascination with the film and, frequently, leads them to a dizzying array of Oz collectibles. Ironically, while the MGM film has in many ways eclipsed the original book, the movie also has led countless viewers to rediscover the Oz series and its many delights that have yet to be glimpsed onscreen. Lots of Oz fans enjoy both the film and the books equally, if in different ways. As the MGM movie’s prologue says, “For nearly forty years this story has given faithful service to the Young in Heart; and Time has been powerless to put its kindly philosophy out of fashion.”

Oz and the film medium were born at roughly the same time, so it was inevitable that Dorothy and her friends would appear onscreen before long. Less than a decade after the publication of The Wonderful Wizard of Oz, L. Frank Baum’s short-lived multimedia production Fairylogue and Radio-Plays (1908) offered a blend of live stage actors, photographic slides, and film clips portraying scenes from Baum’s early Oz novels. Today, only a few slide images from the show are known to exist. 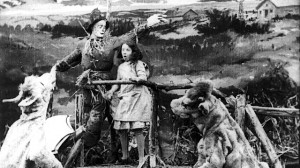 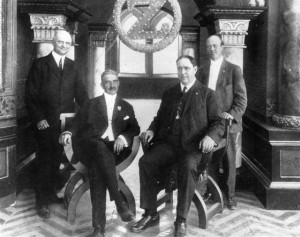 After moving to Hollywood, Baum co-founded the Oz Film Manufacturing Company with three business partners. The independent studio produced The Patchwork Girl of Oz, The Magic Cloak of Oz, and His Majesty, the Scarecrow of Oz in 1914. All three feature films are currently available. The Last Egyptian, based on Baum’s pseudonymous adult novel, survives only in a single partial print preserved in the film collection of the Museum of Modern Art. None of these films enjoyed significant success. After making a few short subjects the following year, the Oz Film Manufacturing Company folded. 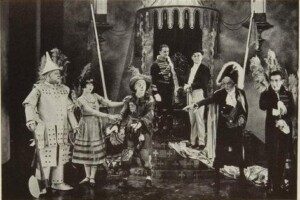 The first large-scale Oz film adaptation was Chadwick Pictures’ production of The Wizard of Oz, released in 1925. It co-starred film comedians Larry Semon and Oliver Hardy (prior to his legendary partnership with Stan Laurel) as the Scarecrow and the Tin Man, and Semon’s wife, Dorothy Dwan, as Dorothy. With a disjointed screenplay cowritten by Semon and L. Frank Baum’s eldest son, Frank Joslyn Baum, the movie bears almost no resemblance to the original book and has a poor critical reputation, although it is widely available.

Fourteen years later, the most famous manifestation of the Oz phenomenon, MGM’s 1939 classic The Wizard of Oz, was released to great acclaim. At long last an Oz adaptation had succeeded widely at the box office. (For more on the MGM film, click here.) 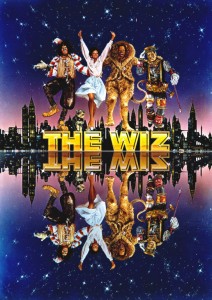 So legendary was the MGM movie that, for decades afterward, few filmmakers dared attempt a follow-up. Those who did found little reward in it, and their films were quickly forgotten. The Wonderful Land of Oz (1969), a low-budget kiddie matinee feature based on Baum’s second Oz book, was roundly panned. The animated feature Journey Back to Oz (1974), which languished in production for more than a decade, included the vocal talents of Liza Minnelli (Dorothy), Mickey Rooney (the Scarecrow), Milton Berle (the Cowardly Lion), Margaret Hamilton (Aunt Em), and Ethel Merman (Mombi); despite its fine pedigree, however, it did not fare well in theaters. In a dramatically different vein, Oz (1976), an Australian hard-rock re-imagining of the first Oz book, also failed to win the hearts of a wide audience.

There were higher hopes for The Wiz (1978), Sidney Lumet’s film adaptation of the Tony Award-winning African-American musical, whose impressive cast included Diana Ross as Dorothy, Michael Jackson as the Scarecrow, Lena Horne as Glinda, and Richard Pryor as the Wiz. But a bloated budget, underwhelming box office, and negative reviews left the production in the red. 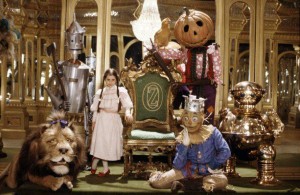 In the 1980s, expectations for a new Oz movie reached fever pitch when Walt Disney Pictures, which had hoped for years to bring Baum’s fairyland to the big screen, made Return to Oz (1985), a sequel combining elements of The Marvelous Land of Oz and Ozma of Oz, the second and third Oz novels. Directed by Oscar-winning film editor and sound designer Walter Murch, the film starred nine-year-old Fairuza Balk as Dorothy and featured stunning visual effects that yielded an Oscar nomination. But critics found the story too dark for children, and the $28 million film earned less than half of Disney’s investment back in its initial release. With its high production values and compelling cinematic elements, however, Return to Oz has gone on to become a cult favorite.

The MGM film’s mythic stature only increased after it celebrated its golden anniversary in 1989, and it became even harder to produce an Oz film without being accused of tampering with a legend. The next major Oz movie would not come until 28 years after the release of Return to Oz, whose failure had doubtless discouraged other filmmakers from trying to adapt Oz for the movies. 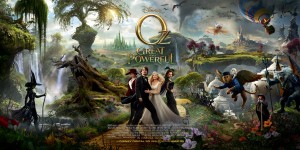 Ironically, it was the studio that had suffered the fallout from Return to Oz that set its sights once more on following the Yellow Brick Road. Oz the Great and Powerful (2013), a Wizard of Oz prequel directed by Sam Raimi and featuring the high-wattage cast of James Franco, Mila Kunis, Rachel Weisz, and Michelle Williams, premiered to a worldwide marketing blitz. Released in both 2D and 3D, the film earned almost $500 million in its theatrical release. Plans for a sequel were quickly announced, and the once-dim prospect of a stream of high-profile Oz movies no longer seemed so far-fetched.