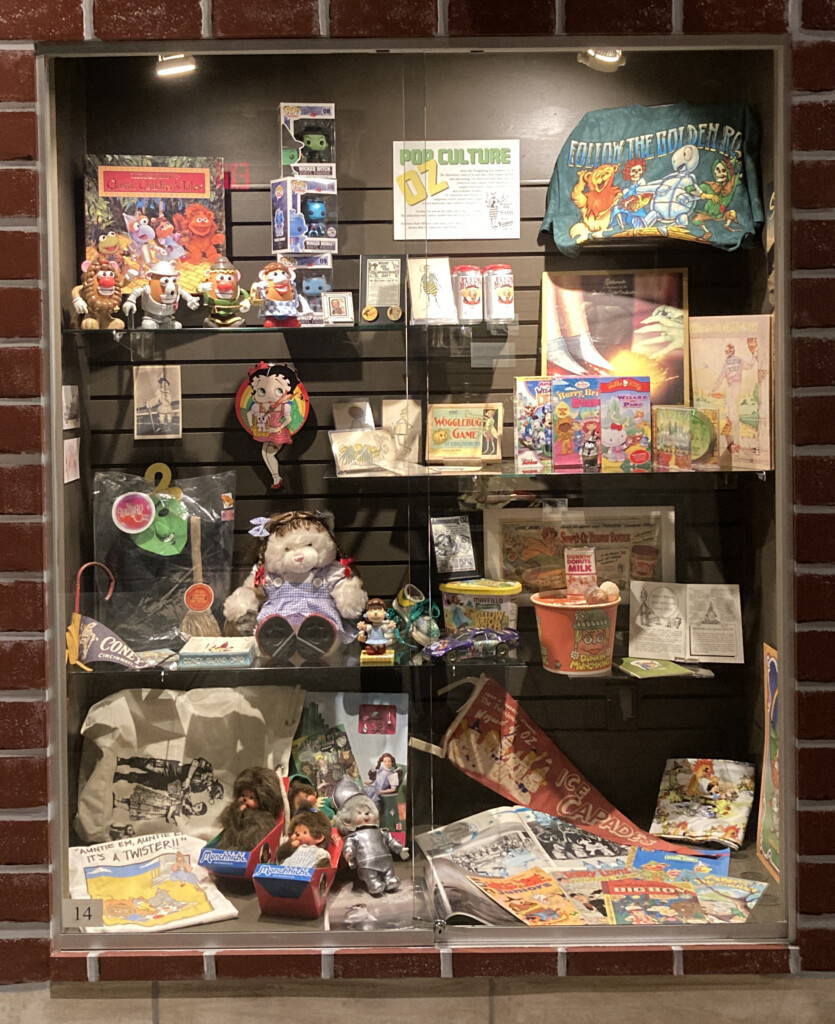 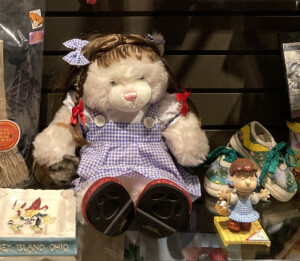 Oz in popular culture is now presented in Case #14 at the Oz Museum in Wamego, Kansas, courtesy of The Oz Club. Visitors will see Oz and Oz characters in food marketing, toys and collectibles, music, attractions, and more.

For the past few years, the museum has worked with me to help publicize the Oz Club by letting me fill this particular case with themed Oz exhibits. We’ve featured 1939 Oz merchandise, Oz stained glass, Russian Oz, and more. This is our eighth exhibit. I provide a new theme twice a year, but the timing is flexible.

Today I took down Oz Maps and put up a fun assortment of pieces that show Oz as it’s appeared in advertising, music, entertainment, and toys. It’s always a challenge to find things that aren’t already on display in the museum. Luckily, curator Chris Glasgow is a delight to work with and always helps me both in advance and onsite. I propose a theme (or six since I’m swimming in ideas), and we agree on one. Then I generally send a list of what I might include, and she ticks off those pieces that would be redundant. For example, the museum has a Muppets Wizard of Oz display in place, so to include them, I selected Muppet material not tied to that film. The Rolling 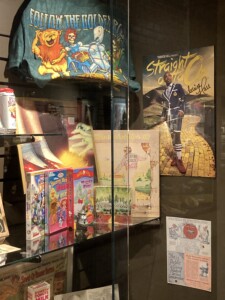 Stone cover with the Jerry Seinfeld cast?  It’s already on display. So is Tom and Jerry’s Wizard of Oz. Oz peanut butter?  They have a massive selection. With the list whittled down, I still pack and take about twice as much as will fit to give myself options.

The oldest material, in this case, are Wogglebug items including What Did the Wogglebug Say? buttons and the Wogglebug Game of Conundrums. Music represented includes LPs of Elton John’s “Goodbye Yellow Brick Road,” a small
poster of Todrick Hall’s “Straight Outta Oz,” and the Grateful Dead’s Follow the Golden Road T-shirt.  I added DVDs in that area of Oz productions where the part of Dorothy is played by Hello Kitty, Strawberry Shortcake, and Minnie Mouse.

Below that section are some fun food products such as Dunkin Munchkins and ice cream packaging, and one of the Jello Oz booklets open to the Jello recipes. I included a fun ad for Swift’s Oz Peanut Spread that I knew they didn’t have.

There are Funko collectibles and Monchhichi dolls, Betty Boop and the Ice Capades, the Land of Oz in Cincinnati, and a Build-a-Bear Dorothy. The Mr. Potato Head figures are always one of my favorites. From comic book characters to an Annie Leibovitz photo spread in Vogue, there’s something for nearly every age group. If you’re able to visit the Oz Museum over the next six months or so, have a look!

Previous ArticleBring your Lynn Beltz stories Dec. 18Next Article2022 Calendars Are (finally!) on Their Way