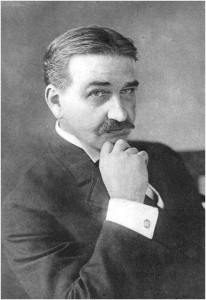 Lyman Frank Baum led a colorful life. Before achieving literary immortality at age forty-four with the publication of The Wonderful Wizard of Oz in 1900, he had been a reporter, a printer, an actor, a poultry breeder, an editor, a theater manager, a playwright, the proprietor of a frontier general store and newspaper, a traveling salesman, a short-story writer, and a pioneer in the field of commercial window displays.

L. Frank Baum’s life also paralleled the development of the country in which he lived. Baum was born on May 15, 1856, in Chittenango, New York, and spent his young life in the East. Dorothy and the other powerful female characters created by Baum were doubtless influenced by the strong women in his life. In 1882 he married Maud Gage, the independent-minded daughter of the prominent suffragist Matilda Joslyn Gage. 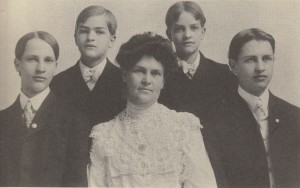 The promise of the American West attracted Baum to the Dakota Territory in 1890, where he made ill-fated attempts to run a retail establishment and a local paper in the town of Aberdeen. Then the paradigm-shifting World’s Columbian Exposition of 1893 drew Baum to Chicago, where he pursued a journalism career. But it was Baum’s mother-in-law who encouraged him to write down the marvelous stories he told his four sons—Frank, Robert, Harry, and Kenneth—and the neighborhood children. Baum’s career as a children’s author began with Mother Goose in Prose in 1897; two years later, Father Goose: His Book became the top-selling juvenile publication of 1899.

Chicago’s burgeoning combination of concentrated graphic design talent and new achievements in publishing technology helped to produce The Wonderful Wizard of Oz. Wizard showcased Baum’s text, telling a straightforwardly entertaining tale that dispensed with moralizing and featured a strong female protagonist in the form of Dorothy, alongside the illustrations of W. W. Denslow, whose boldly imaginative illustrations and page design created a sea change in the aesthetics of juvenile titles. Once again Baum had written the bestselling children’s book of the year. 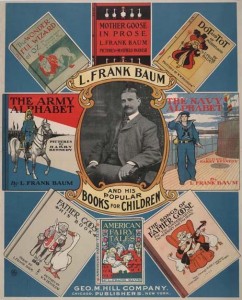 Although Baum did not attain a full-time career as a writer until 1897, he quickly made up for lost time. All told he wrote more than 50 novels (including 14 Oz books), almost all of them for children, as well as more than 80 short stories, a couple hundred poems, and at least a dozen plays. The 1902 stage musical adaptation of The Wizard of Oz became a national sensation on Broadway and in extensive touring, and proved to be Baum’s greatest financial and artistic success. Unfortunately, none of his subsequent theatrical efforts proved nearly as rewarding, and Baum’s repeated efforts to recreate that earlier triumph were often to the detriment of his personal finances and authorial reputation.

The geographic parallels between Baum’s life and the country’s continued after he found literary success. In 1910 he moved to the sleepy town of Hollywood, whose pastoral beauty and balmy climate had already begun to attract early filmmakers. Baum became one of them when, in 1914, he founded the Oz Film Manufacturing Company to produce movies based on his own books. Although he built state-of-the-art facilities to make his films, his imagination, as it often did, had outpaced the public’s; children’s movies had not yet found a market, and it would take another quarter-century for Oz to find a commercially successful incarnation on the silver screen. 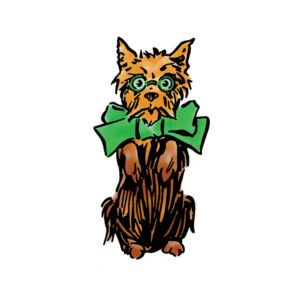 Despite Baum’s attempt to end the Oz series in 1910 with The Emerald City of Oz, children clamored for “more about Dorothy,” and the Royal Historian of Oz had no choice but to acquiesce. Out of his fervid imagination was born the most indelible American-made fairyland ever invented. At the end of his life Baum knew well, despite the dizzying array of professional and amateur endeavors he had pursued with his innate curiosity and sense of adventure, that the Oz books and his other writings for children would be his most enduring legacy.

In an inscription to his sister Mary Louise Brewster in a copy of his first children’s book, Mother Goose in Prose, more than two decades before his death on May 6, 1919, Baum wrote: “When I was young I longed to write a great novel that should win me fame. Now that I am getting old my first book is written to amuse children. For, aside from my evident inability to do anything ‘great,’ I have learned to regard fame as a will-o-the-wisp which, when caught, is not worth the possession; but to please a child is a sweet and lovely thing that warms one’s heart and brings its own reward.”