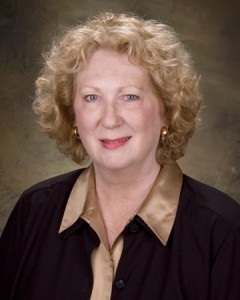 Angelica Shirley Carpenter co-wrote L. Frank Baum: The Royal Historian of Oz (1992), a biography for young readers, with her mother, Jean Shirley. It quickly brought her to the attention of IWOC members, and just as quickly she became a welcome addition to its leadership.

As director of the public library in Palm Springs, Florida, and president of the Library Association there, Angelica staged The Wizard of Oz and founded an annual literary festival that attracted dozens of contemporary authors. She initiated efforts to have W.W. Denslow’s Chicago office building declared a literary landmark, and began speaking about Baum and Oz to academic groups.

Angelica organized programming about literary aspects of The Wizard of Oz for the Club’s centennial celebration. Because she was involved, members of the Children’s Literature Association, famed author Alison Lurie, and others from the literary and academic communities joined the convention, greatly enriching the program for Oz fans.

Angelica was the founding curator and is now curator emerita of the Arne Nixon Center for the Study of Children’s Literature at California State University, Fresno, and is the author of five biographies of famous children’s authors. She has been Oz Club president, a presenter and participant at Club conventions, and a contributing editor to The Baum Bugle.

David grew up in Albuquerque, where his second-grade teacher introduced him to the Oz books. He received his BFA from New York University’s Tisch School of the Arts in 1990, and his MFA from the Yale School of Drama in 1993. David has been a professional scenic designer, serving as resident designer at Bard College for several years. His many production designs include Sweeney Todd for Skylight Opera in Milwaukee.

He received a Grammy Award nomination for Best Historical Album as producer of the two-CD set Vintage Recordings from the 1903 Broadway Musical The Wizard of Oz, which was also nominated for Best Research in Recorded Popular Music by the Association of Recorded Sound Collections Awards for Excellence. He has spoken widely about that CD and other Oz stage music.

In the 1980s David’s Pumperdink Press newsletter brought him to the attention of Club members. Oz-story Magazine, a polished periodical of both new and rare Oz material, followed many years later. He has contributed to Oziana, The Oz Calendar, and The Oz Game Book. David attends conventions regularly, mounts extensive exhibits of foreign Oz and Baum books drawn from his own collection, and is well remembered for his multimedia recreations of the original Broadway production of The Wiz.

By the year 2000, David was able to present a lavish multimedia presentation of the 1903 Broadway Wizard of Oz to an audience at the Club’s centennial celebration. For that event, he also served as chairman of programming related to Oz on stage and screen.