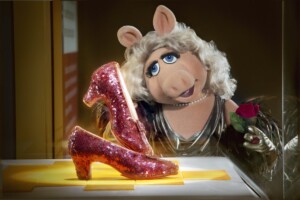 Oz and the Muppets by Jane Albright

Puppets, Oz, and television merged with the arrival of the Muppets on Sesame Street, the famous PBS children’s program that began in 1969. The memorable cast of lovable characters were designed with young children in mind by James Maury “Jim” Henson. Born on September 24, 1936, Henson loved the movies and never forgot seeing MGM’s The Wizard of Oz as a child; it had a profound influence on the future puppeteer.

As early as 1970, The Wizard of Oz was associated with the Muppets. Margaret Hamilton famously reprised her role as the Wicked Witch of West in 1976, sharing Sesame scenes with Oscar the Grouch, while in 2015, the Cookie Monster searched for “The Cookie of Oz.” 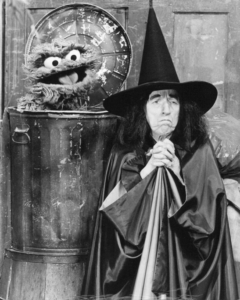 Oz references were even more common on the Muppets’ primetime variety show, The Muppet Show. In 1976, Elton John sang his 1973 hit “Goodbye Yellow Brick Road” with the house band, Dr. Teeth and the Electric Mayhem, dressed in a yellow jacket with sparkly “emerald” trim. In 1978, an episode of the same series opened with Robin the Frog singing “Over the Rainbow,” while an Alice in Wonderland-themed sequence of a 1980 episode, guest starring Brooke Shields, descended into a full-cast chorus of “Off to See the Wizard.” Just a few months later, an episode featured French flautist Jean-Pierre Rampal recreating “The Pied Piper of Hamelin” and leading Muppet children out of the titular village to the tune of The Wiz‘s “Ease on Down the Road.”

The 1981 TV special The Muppets Go to the Movies even included a full-scale sequence replicating scenes from the MGM movie, with Miss Piggy (Dorothy), Scooter (Scarecrow), Gonzo (Tin Man), Fozzie (Lion), and Foo-Foo (Toto) singing a medley of songs from the MGM movie (“Over the Rainbow”/”If I Only Had a Brain”/”Off to See the Wizard”). The two elderly hecklers, Statler and Waldorf, commented: “I’d follow the yellow brick road…it’d get me out of this theater!” 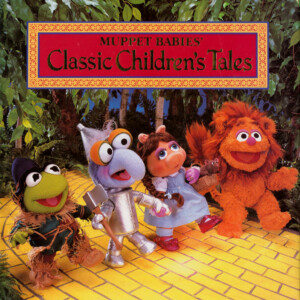 Even the Muppet Babies got in on the act. The touring 1986 stage show Muppet Babies Live! included “Ease on Down the Road” and “I’m a Mean Ole Lion” from The Wiz, while the 1990 picture book Muppet Babies: Classic Children’s Tales included a cover photo of Baby Piggy as Dorothy, Baby Kermit as the Scarecrow, Baby Gonzo as the Tin Woodman, and Baby Fozzie as the Cowardly Lion. The photo was also used in a calendar released the same year.

Oz references tapered off following Jim Henson’s death in 1990, but a few have snuck in since then. Rosie O’Donnell was a stylish “Good Hope Fairy,” clearly styled on MGM’s Glinda, in the 1994 Sesame Street special, Stars and Street Forever!, and Kermit appeared in the 1996 TV special Smithsonian Fantastic Journey commenting on the museum’s exhibit for the Ruby Slippers worn by Judy Garland. In a 1996 episode of Muppets Tonight, guest Billy Crystal asked, “We’re not in Kansas anymore?” while in Muppets from Space (1999), Rizzo the Rat cried out from a wind tunnel, “Auntie Em! Auntie Em! It’s a twister!” Most recently, in a 2015 episode of The Muppets, Jason Bateman directed a production of Wicked at his on-screen daughter’s school—with help from Kermit. 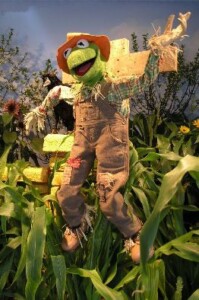 Of course, most fans will remember that The Muppets’ Wizard of Oz was a TV special in 2005. What they may not realize is that the premiere of the TV movie was heralded at Macy’s Herald Square store in New York City. Store windows promoted a flower show with the Muppet Oz characters during the annual Tribeca Film Festival.

Want even more? Check out the Muppet Wiki’s page on The Wizard of Oz.